The Collection welcomes 3,000-year-old sun pendant on loan from the British Museum 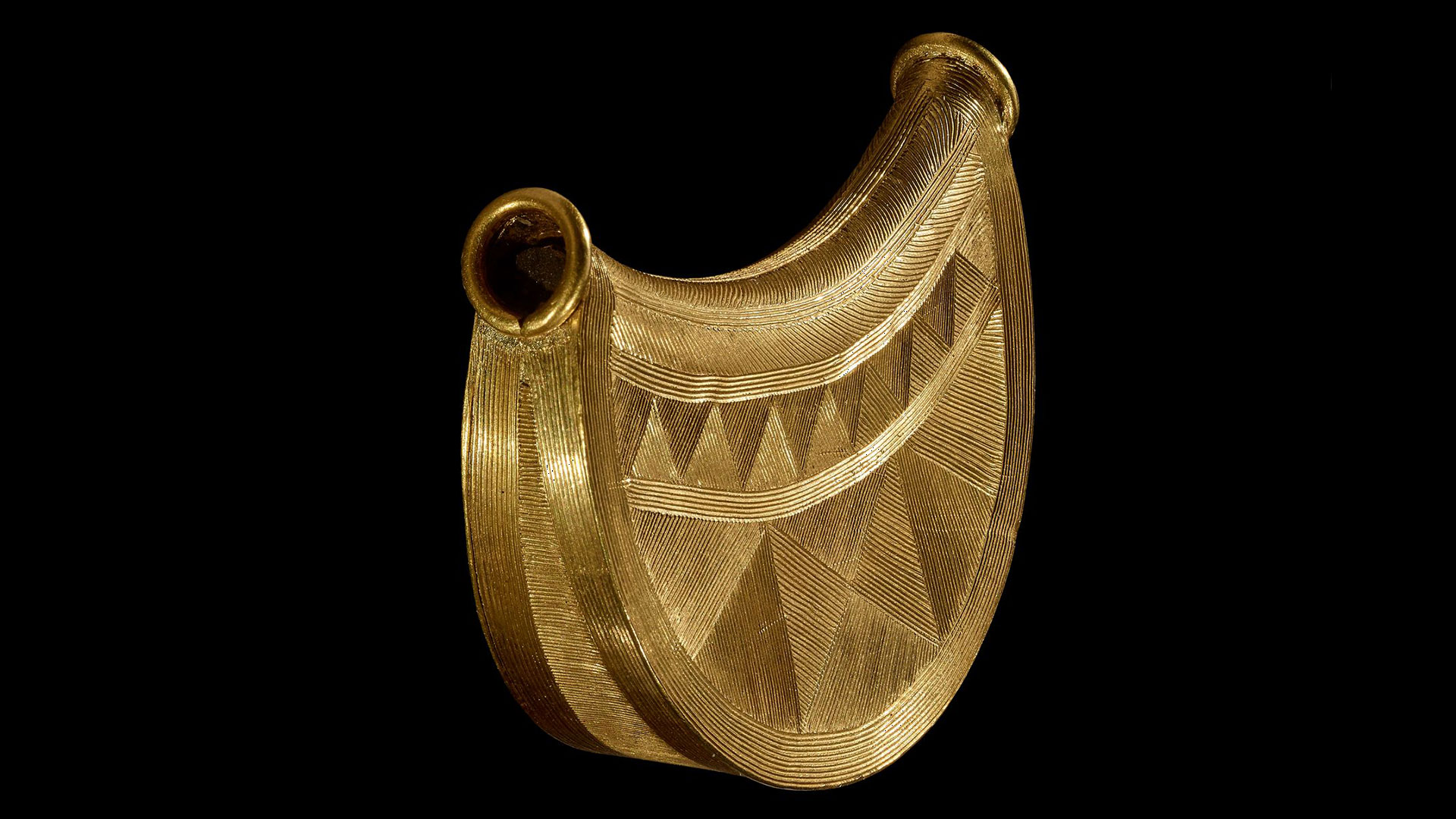 A British Museum Spotlight Loan Gathering light: A Bronze Age golden sun, which gives an insight into the cosmology of Bronze Age Britain, goes on display at The Collection Museum in Lincoln.

A key component in the British Museum’s The world of Stonehenge exhibition, Gathering Light is touring the country, supported by the Dorset Foundation in memory of Harry M Weinrebe.

It will be on display at The Collection Museum until 20 February 2023, and entry is free.

In Britain, the Bronze Age period lasted from around 2150BC until 800BC. Solar symbolism was a key element of mythology and belief during this period: the sun charted the day and provided life.

This Spotlight Loan reveals the importance of the sun to the lives of Bronze Age ancestors, including the use of precious gold to depict the golden star and its centrality to their beliefs in this period.

Gathering light stars the extraordinary Shropshire sun pendant (HESH-43148A), which is over 3,000 years old, dating between 1000–800BC in the late Bronze Age period.

The sun pendant, also known as a bulla, with its elegant form and intricate decoration could be one of the most significant pieces of Bronze Age metalwork ever discovered in Britain. This spectacular object includes an exceptionally rare depiction of the sun – not previously seen on objects found in Britain.

The pendant celebrates the life-giving power of the sun during the time of the earliest metalworkers and is a hugely significant addition to our understanding of the art and iconography of Bronze Age Britain.

The Spotlight Loan also features a stunning gold lunula (BCB62314), likely worn around the neck and dating from between 2400–2000BC, making it at least 4,000 years old. This crescent-shaped collar is named because it resembles a ‘little moon’.

Discovered in a bog near Mangerton, Ireland in July 1842, this is one of only around 100 lunula examples that have been found in western Europe to date. Interestingly, over 80 of these ‘little moons’ come from Ireland, indicating a distinctively Irish cultural form.

The collar was made by beating gold into a very thin sheet then decorated with a complex finely-incised geometric triangle pattern with considerable skill and was probably worn as jewellery or a ritual item.

Another gold bulla found in Ireland (BCB62490), dating between 1150–750BC and globular purse shaped rather than half-moon shaped, will also be on display as part of the Spotlight Loan.

A similar age to the Shropshire sun pendant, the appearances and shape of the two bullas vary vastly. Similarly decorated with geometric patterns, though much less elaborate, it contains a cylindrical opening along the top which suggests it may have been worn as a pendant.

“We are hugely excited to be working with The Collection to bring the internationally significant Shropshire Sun Pendant to Lincolnshire.

"The exhibition will shine a light on cosmology in Bronze Age Britain and the beliefs of this fascinating period of history. We hope that audiences will be inspired by these stunning objects.”

“We’re delighted to partner with the British Museum for this Spotlight Loan and bring the Shropshire sun pendant and other significant Bronze Age artefacts to Lincolnshire.

"It’s a great opportunity to make connections between the collections from the British Museum and our own museum collections, and interpret them in a different way.

“We’re also pleased to be showcasing some recent finds from Lincolnshire, not seen on display before.”

A British Museum Spotlight Loan Gathering light: A Bronze Age golden sun will be on display at The Collection Museum, Danes Terrace, Lincoln, from 11 November to 20 February 2023.

Plan your visit now at www.thecollectionmuseum.com.