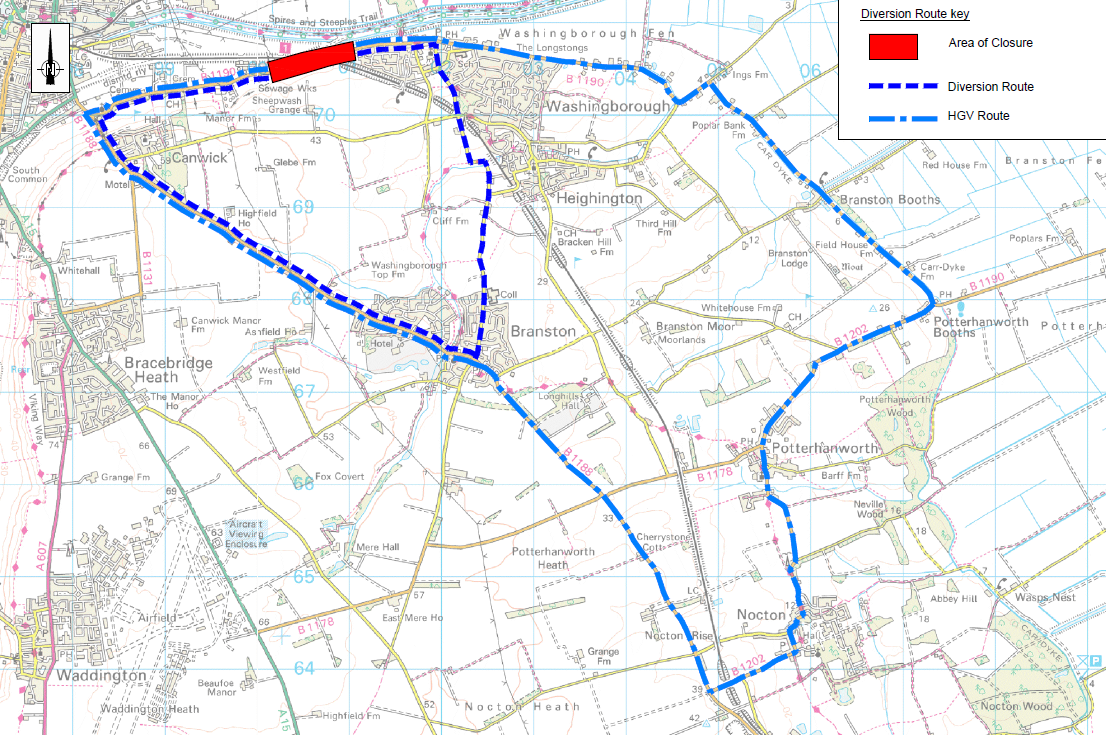 Washingborough Road will be closed for up to five months from Monday 17 February.

The temporary signals will remain in use every morning, but will no longer be in operation after 3pm (exact shut-off times will vary depending on operational needs).

When the signals are not in use, they will switched off and removed, along with all related signage.

The right-turn ban into Heighington Road will remain in place 24/7.

Cllr Richard Davies, executive member for highways, said: "The barriers that were restricting vision and making it unsafe to remove the temporary lights from the junction have now been taken away and the lights can now be removed each afternoon.

"We apologise for any confusion surrounding the changing of these signals, but we're now confident we can safely get traffic flowing more freely during the closure of Washingborough Road.

"Thanks for bearing with us during the construction of Lincoln's much-needed Eastern Bypass."

The traffic signals at the Heighington Road / Canwick Hill junction will be temporarily re-implemented on a 24/7 basis as of this afternoon.

Cllr Richard Davies, executive member for highways, said: "As part of our plan for changing the signal operation times here, our traffic management contractor removed some of the temporary barriers overnight so drivers could turn more easily onto Canwick Hill.

"However, our team noted that, due to the slope of the junction, the remaining barriers can obstruct the view for people wanting to leave Heighington Road, making it unsafe to turn onto Canwick Hill.

"So for the safety of our road users, we've decided to re-implement the signals on a 24/7 basis, just until all the barriers can be removed and replaced with lower ones that don't obstruct visibility.

"We expect this to be within the next seven days.

"We apologise for any confusion."

From Friday 6 March, the temporary traffic signal arrangement at the Heighington Road / Canwick Hill junction will be changed.

The temporary signals will remain in use every morning, but will no longer be in operation after 3pm (exact shut-off times will vary depending on operational needs).

When the signals are not in use, they will switched off and removed, along with all related signage.

The right-turn ban into Heighington Road will remain in place 24/7.

Cllr Richard Davies, executive member for highways, said: "Our traffic team has been monitoring the effects of the temporary signals at the Heighington Road / Canwick Hill junction and found that they have been causing congestion when people are leaving Lincoln after work in the week.

"As a result, we've made the decision to continue using the signals for people traveling towards Lincoln in the morning, but will remove them ahead of the late afternoon and evening rush.

"We will continue monitoring the impact of the signals and will modify them as and when necessary to ensure traffic flows as smoothly as possible while Washingborough Road is closed.

"I want to thank everyone for remaining patient as we work towards opening Lincoln's new bypass later this year."

The road closure will be from the entrance of the Anglian Water compound in the west to the rail bridge just past the bypass site.

This will allow for the final new bypass roundabout to be built, along with other essential works including lowering Washingborough Road by 1.5m and carrying out drainage, street lighting, kerbing and surfacing works.

Cllr Richard Davies, executive member for highways, said: "When the closure starts, we expect there to be significant disruption south of Lincoln, particularly on the B1188 between Branston and Lincoln.

"Because of that, we're asking drivers to leave extra time for their journeys.

"We're also encouraging people to consider using other modes of transport while Washingborough Road is shut, including catching the train from Metheringham into Lincoln, and vice versa if possible.

"To ease traffic on the roads, we'll be installing temporary CCTV cameras at the Branston junction so our traffic team can monitor the area and tweak the timing of the signals there and at the Washingborough Road/Canwick Hill junction if necessary.

"We'll also be installing temporary traffic signals at the end of Heighington Road to make getting onto Canwick Hill easier for people choosing to use this route.

"However, our advice to drivers is to follow the official diversion and avoid using Heighington Road."

Please note a right-turn ban onto Heighington Road will be in place for drivers traveling towards Lincoln.

Cllr Davies continued: "This road closure is an essential part of getting Lincoln's eastern bypass built, and it's important for people to remember all the benefits the new road will bring once open later this year.

"This includes reduced congestion in and around Lincoln and a huge boost to the local economy."